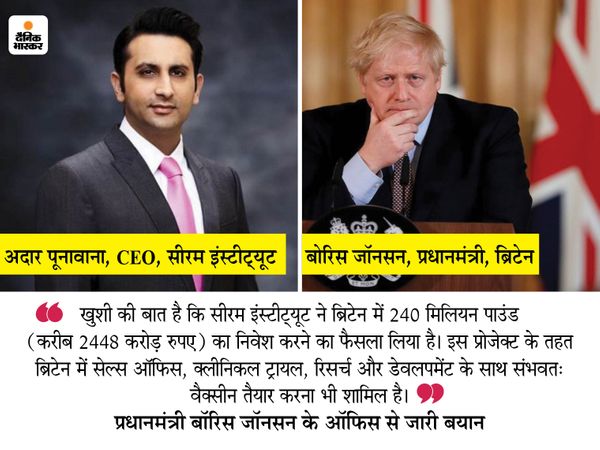 Serum Institute of India (SII), the world’s largest company making Corona’s vaccine, has decided to invest Rs 2448 crore in the UK. British Prime Minister Boris Johnson announced this on Monday. On behalf of Johnson’s office it was said, ‘It is heartening that the Serum Institute has decided to invest 240 million pounds (about 2448 crore rupees) in the UK. Under the project, sales offices in the UK, clinical trials, research and development are also likely to produce vaccines. ‘

Agreement on vaccine with India
According to information released by PM Boris Johnson’s officer, Britain and India will work together in the vaccine field. About 1 billion dollars of trade and investment is to be done through it. This will create around 6500 jobs. For this, Prime Minister Johnson and Narendra Modi will also hold virtual talks on Tuesday. Only after this it will be announced.

Poonawala said, threats are being received in India; Cleaned up later
Serum Institute of India (SII) CEO Adar Poonawalla had told Times UK in London a few days ago that he was receiving constant threats in India. It was alleged that India’s powerful leaders and businessmen are threatening them on the phone. Some of them also include the Chief Minister. All are demanding that KoviShield be supplied immediately.
However, later he also clarified. Said that the vaccine is produced through a special process, we cannot produce a large number of vaccines overnight. He said that the population of India is very large and it is not easy to prepare enough vaccines for all adults. Many large countries and companies are struggling with a vaccine shortage despite a sparse population.

Security of Y category has been found in India
Poonawala got the Y category security last Wednesday. Central government officials had said that Poonawala had been given security in view of the threat. Now 11 security personnel, along with 4-5 commandos of the Central Reserve Police Force (CRPF), will remain with Poonawala at all times. They will get this security cover all over the country.