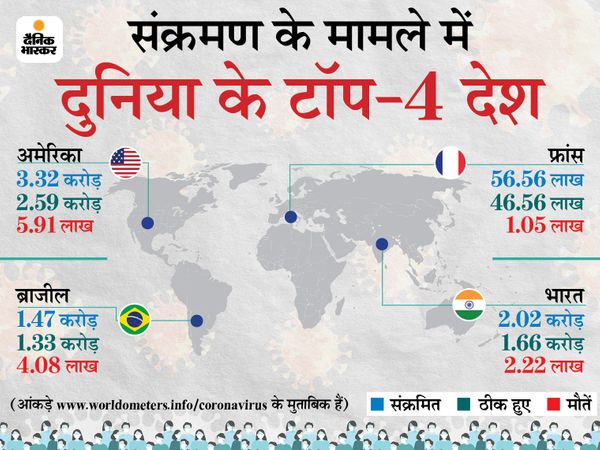 The whole world is battling the Corona epidemic these days. After record cases for the past several days, there is now a decrease in new cases of Corona. Last day 6.68 lakh corona infects were identified in the world. During this period 10,437 people also died.

Monday was the second day in a row when less than 7 lakh cases were recorded in the world. Earlier on May 2, 6.96 lakh cases were reported. At the same time, on May 1, more than 8 lakh corona infects were identified.

On the other hand, preparations have begun to approve Pfizer’s Corona vaccine for 12 to 15-year-olds in the US. The US Food and Drug Regulator may allow Pfizer and BioNtech’s Corona vaccine next week.

Vaccine Trial on 2,260 Children
Pfizer conducted a vaccine trial on 2,260 children aged 12 to 15 years in the United States. After the trial, the company said that the antibodies were made inside the children just like the youth. The company says that after the vaccine, no major side effects have been seen in children. After the second dose of the vaccine in children, the common side effects like pain and fever were seen in the youth.

Top 10 countries, where most people have been infected so far

(These figures are according to www.worldometers.info/coronavirus/)